Winter scene with a good look at the unusual ‘sun-pillar’ effect. 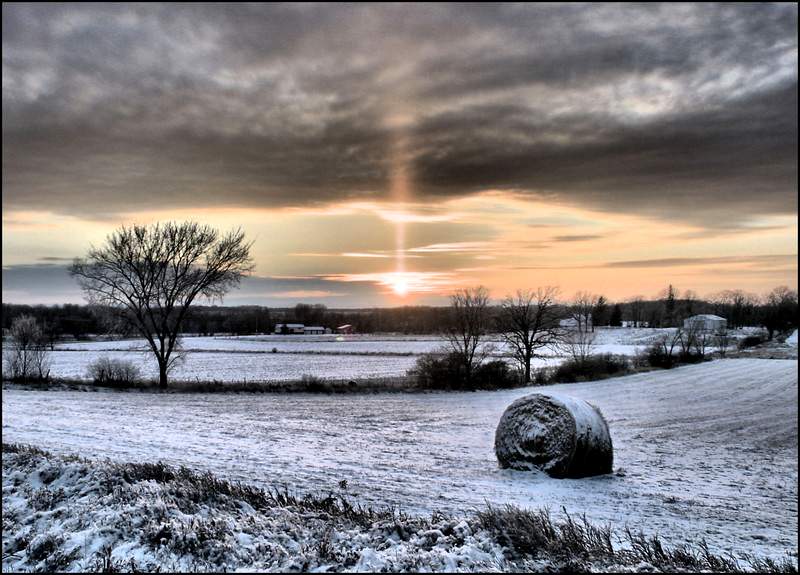 Sun Pillar on a Winter Day

This is a type of optical effect when sunlight is reflected off ice crystals in the air. They are commonly called Sun pillars or light pillars. The effects shows both above and below the sun, but the most dramatic displays show a bright pillar above that extends high into the sky.

The amount and type of ice crystals in the air also have an effect on how brilliant the display becomes.

Light pillars are formed by reflection from ice crystals with roughly horizontal faces.

Light pillars have also been known to produce false UFO reports. Niagara Falls is one such area, where the mist from the Niagara Falls causes the phenomenon to appear frequently during the winter months, where the ice crystals interact with the city’s many upward facing spotlights to create prominent light pillars.

Any type of light source can form light pillars if the conditions are right. Street lights and other artificial light can create the effect. The moon can also cause light pillars.

When they are bright they make for a great photo opportunity.

If you live where you get colder weather, glance up at the sky on those chilly days. You might get a chance to capture a sight most people never see.

Any thoughts, ideas, or things you'd like to see? It just takes a second to send your question, critique or brainstorm.