Did I ever tell you I could hit a golf ball over a mile on level terrain? No, I’m not kidding, it’s true! I just need to find the right frozen lake with no snow and a little wind at my back.

Which brings me to my first subject, ice. And particularly, ice fishing. I have to admit that ice fishing is not a pastime (I hesitate to call it a sport) that I am exceedingly fond of. But taking a photo of a dedicated ice fisherman sitting on the lake (for hours at a time, usually) gives me the chance for a late evening shot to see how things turn out. (Click on the photo for a larger view.) I had to set up the tripod to take this since it was actually darker out than it seems in the photo.

Again, this is not a wall hanger shot, but another in my series of photos to add to my photo education. There were quite a few problems with this shot and the final result. At first glance, this looked like a good opportunity that could have been a great shot. But I stumbled upon the scene on my way home from a photo outing. The light sitting on the ice caught my eye and I thought, “why don’t I take a picture?” (I think that a lot.)

But I didn’t know the guy on the ice, 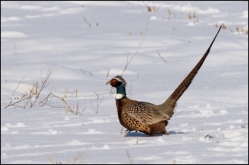 and it really was rather dark so we couldn’t see each other. I walked out fairly close to him and told him I saw him and his light and wondered if it was OK if I took his picture from ‘up there on the shore’. He said go for it, so I did.

But I rushed this a lot and really didn’t have time to compose things. That’s a lesson learned right there. Don’t waste your time trying to take a ‘good’ picture if you don’t have time. And it took enough time setting up the tripod and fiddling around. I didn’t want the guy to think I was some kind of nut job so I took a couple of different exposures and skedaddled.

I can think of a number of ways to try this type of shot again in the future. The obvious ones are to get down on the ice, or maybe really low down rather then going back ‘up on the shore’. And a close up of the fisherman with the lantern accentuated would have been a nice shot. But as I have said, I at least took a shot that will give me food for thought for the future.

If it wasn’t snowing like crazy today and tonight, I would be camped near this tree taking a long telephoto shot of it and the full moon. But it’s totally overcast and they are forecasting the same for tomorrow. Maybe on Easter Sunday the clouds will break in the evening but the moon won’t rise until 10:03 PM, so that will probably be a bust since this silly tree is 20 some miles from home. But we’ll see.

Any thoughts, ideas, or things you'd like to see? It just takes a second to send your question, critique or brainstorm.

This website uses cookies to improve your experience while you navigate through the website. Out of these, the cookies that are categorized as necessary are stored on your browser as they are essential for the working of basic functionalities of the website. We also use third-party cookies that help us analyze and understand how you use this website. These cookies will be stored in your browser only with your consent. You also have the option to opt-out of these cookies. But opting out of some of these cookies may affect your browsing experience.
Necessary Always Enabled
Necessary cookies are absolutely essential for the website to function properly. This category only includes cookies that ensures basic functionalities and security features of the website. These cookies do not store any personal information.
Non-necessary
Any cookies that may not be particularly necessary for the website to function and is used specifically to collect user personal data via analytics, ads, other embedded contents are termed as non-necessary cookies. It is mandatory to procure user consent prior to running these cookies on your website.
SAVE & ACCEPT